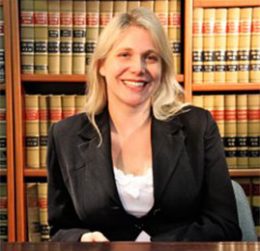 Ms. Jodoin was elected by her peers to serve as the President of the Massachusetts Employment Lawyers Association (“MELA”) from June 2014-2016. MELA is an organization of employment attorneys who work to enforce and advance employee rights by increasing awareness, improving advocacy, supporting plaintiff-side employment lawyers in their practices, and monitoring legislation. Ms. Jodoin continues to serve on MELA’s Executive Committee, now as the Co-Chair of MELA’s Legislative Committee, where she is responsible for orchestrating MELA’s activities with respect to changes in the legislation governing the rights of Massachusetts employees. The Legislative Committee facilitates member participation in lobbying efforts and works with other organizations to identify and respond to issues arising in workplace legislation.

Her vigorous representation of employees led to Ms. Jodoin being named a Rising Star by Super Lawyers repeatedly in 2009, 2010, 2011, 2012, and 2013, in recognition of her emerging reputation in ending discrimination on the basis of race, age, gender, national origin, religion, sexual orientation, disability, and pregnancy, as well as representing employees terminated as a result of retaliation or other protected conduct. In 2014, Ms. Jodoin was named a Boston Rising Star by the National Law Journal and the Connecticut Law Tribune, an honor presented to only 40 outstanding attorneys in the Boston area, age 40 or younger. In 2015, Ms. Jodoin was named a Top Woman in Law by Massachusetts Lawyers Weekly. In 2015, 2016 and 2017, Ms. Jodoin was named a Massachusetts Super Lawyer in her field.

-What to Do When an Employment Case Comes Across Your Desk, Massachusetts Academy of Trial Attorneys, May 12, 2015;

United States Court of Appeals for the First Circuit

Ms. Jodoin is the co-author of a book, entitled, Representing a Plaintiff in a Wrongful Termination Case, which was published through the Massachusetts Continuing Legal Education;