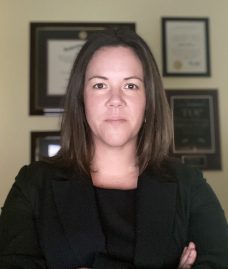 Beth Myers is a Partner with Powers, Jodoin, Margolis & Mantell LLP.  She has been with the firm since 2010, and is respected in her field as an zealous advocate for employees and an experienced litigator.  She prides herself on having a creative approach to resolving employment-related disputes, and has a proven record of achieving results for her client in and out of the courtroom.

Before joining Powers, Jodoin, Margolis & Mantell LLP, Beth served as a law clerk for the Honorable Margaret R. Hinkle in the Massachusetts Superior Court, where she developed a passion for the courtroom.

When she is not practicing law, Beth enjoys running, traveling to anywhere sunny, and spending time outdoors with her wife, son and their dog. 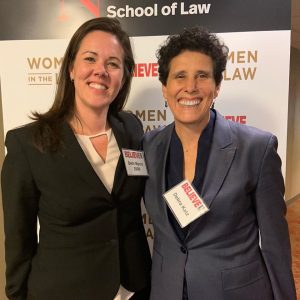 Beth represents individuals in every aspect of the employment relationship, with a particular concentration on litigation in state and federal court as well as before the Massachusetts Commission Against Discrimination in cases discrimination, sexual harassment and retaliation. She handles claims arising under state and federal anti-discrimination laws, (including G.L Ch. 151B, Title VII, the Family Medical Leave Act, the Americans with Disability Act, the Age Discrimination in Employment Act and the Equal Pay Act.), wage and hour laws, contract and common law.

In her litigation practice, Beth represents employees in cases involving claims of:

As lead counsel, Beth won a jury trial in Plymouth County Superior Court on behalf of their clients who had been sexually harassed and retaliated against by their former employer.  The jury awarded a combined verdict of $290,000.  Following the trial, the Court awarded our clients $424,694.25 in attorneys’ fees, bringing the total judgment to over $700,000.   Ebone et al. v. BMI Surplus, Inc., et als. (Plymouth Superior Court, August 2018) 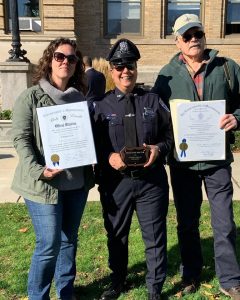 Beth was lead counsel in a March 2018 jury trial, win which she secured a $2M verdict for her client Judy Racow, a female police officer in Winthrop, MA.  A Suffolk County jury found that the Town of Winthrop engaged in unlawful sex discrimination and retaliation against Officer Racow, and awarded her $676,000 in emotional distress damages.  The jury further determined that the Town’s conduct was so outrageous and egregious that it warranted $1,352,000 punitive damages to condemn and deter future conduct of the same nature.  Following the trial, the Court awarded our client $541,554.25 in attorneys’ fees, bringing to total judgment to $2.8M.  The case, and a subsequent retaliation case brought by Racow ultimately settled in 2019 for more than $3M.   Racow v. Town of Winthrop (Suffolk Superior Court, 2018).

Beth and her colleague Jon Margolis tried a case at the Massachusetts Commission Against Discrimination, in which the Town of Winthrop’s first female police officer was discriminated against and denied promotion to the rank of Sergeant for more fourteen years in retaliation for her earlier complaints of sex discrimination. In a favorable decision issued in January 2014, the hearing officer ordered the Town to promote our client to the rank of Sergeant retroactive to 2002, awarded her lost wages and emotional distress damages, and assessed the maximum civil penalty against the town for multiple violations of the anti-discrimination laws.  Dalrymple v. Town of Winthrop (MCAD, 2014).

With Jon Margolis, Beth tried a discrimination and retaliation case, in which the jury awarded $506,000 to a female Assistant Chief Probation Officer, finding that her employer, the Office of the Commissioner of Probation retaliated against her for complaining of discrimination.  Following the trial, the Court awarded our client an additional $233,463 in attorneys’ fees.  Helen Brown et al. v. Office of the Commissioner of Probation et al. (Suffolk Superior Court, 2011).

Beth successfully argued at the Massachusetts Appeals Court in a case, in which the Trial Court had denied her client’s petition for the award of attorneys’ fees.  The Appeals Court reversed the lower court’s decision, and subsequently the matter was resolved privately.  Esler v. Sylvia-Reardon and Massachusetts General Hospital (Mass. App. Ct. Nov. 26, 2018).

With her colleague, Jon Margolis, Beth won an appeal at the Supreme Judicial Court against the State Police, expanding the definition of discrimination claims.  In Yee v. Massachusetts State Police, 481 Mass. 290 (2019), the highest-ranking Asian American officer in the State Police sued, because he was repeatedly ignored and passed over for a transfer that would have given him substantially more earning potential.  The Trial Court dismissed the case, asserting that Lt. Yee had not shown that he suffered an adverse action necessary to obtain relief.  Beth and Jon convinced the Supreme Judicial Court that their client had suffered real harm and deserved to be heard.  You may read and download a copy of the decision here.

Beth and Jonathan Margolis briefed and argued the appeal which overturned a Superior Court ruling that set aside a $1.2 million jury verdict awarded to a nurse who Massachusetts General Hospital retaliated against for taking time off under the Family and Medical Leave Act. As a result of the appeal, the court reinstated the jury’s award of $567,500 in back pay damages. Esler v. Sylvia-Reardon and Massachusetts General Hospital (Mass. App. Ct. 2015).

Beth spoke at Northeastern University School of Law’s 2019 Women in the Law Conference on a panel on #MeToo in the Workplace that also featured Debra Katz, a leading D.C. employment lawyer who represented Dr. Christine Blasey Ford during the Kavanaugh hearings.

Panelist at Northeastern University’s School of Law annual Labor & Employment, in which she spoke on trying sexual harassment and sex discrimination cases in the wake of the #metoo movement, November 2018. 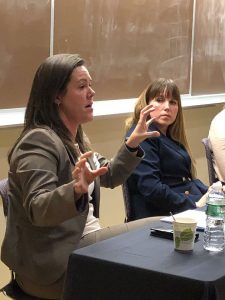 Panelist at Women in eDiscovery’s April 2018 program “Sexual Harassment Litigation in the Wage of the #Metoo Movement.”

Contributed to a Bloomberg BNA treatise on workplace law of gender identity and sexual orientation, “Gender Identity and Sexual Orientation Discrimination in the Workplace: A Practical Guide,” 2015.

Massachusetts Lawyers Weekly interviewed Beth in connection with the U.S. Supreme Court’s recent decision in New Prime Inc. v. Oliveira, which held that §1 of the Federal Arbitration Act, which exempts “contracts of employment” of certain transportation workers from the act’s coverage, applied to a driver’s contract with an interstate trucking company under which he was labeled an “independent contractor.”  Click here for the full article.

Beth was quoted in the Boston Globe’s December 2017 article “Workplace bullying remains in the shadows.”  Click here to read the article.

Beth was interviewed and quoted in the Worcester Telegram’s December 2017 article on the realities of pursuing sexual harassment claims. Click here to read the article.

Beth was interviewed by the West Roxbury Transcript in connection with her representation of an Assistant Chief Probation Officer who filed suit against the Probation Department for sex discrimination and retaliation, January 2011.

Beth was recognized as a Women in Law 2018 and 2019 Award Winner by Lawyer monthly.

Beth has been named a Rising Star by Super Lawyers and Boston Magazine every year since 2013, and she was named a 2015 Rising Star by the National Law Journal and Connecticut Law Tribune’s Boston.

Beth is the President of the Massachusetts Chapter of the National Employment Lawyers Association (2018-2020). She previously served as Vice President from 2016-2018, co-chair of the organization’s Programming Committee from 2014-2016, and she was the Secretary from 2011 to 2014.

Beth is the President of the board of directors of Lawyers Concerned for Lawyers, Inc. (LCL), a private, non-profit Massachusetts corporation that assists lawyers, judges, law students, and their families who are experiencing impairment from addiction, mental health and/or personal issues.

Beginning January 2020, Beth serves on the Supreme Judicial Court’s Standing Committee on Lawyer Well-Being, which is charged with planning and overseeing efforts to enhance the well-being of lawyers, judges and law students in the Commonwealth.

In 2012, Beth served as a member of the Massachusetts Commission Against Discrimination Committee to Propose Draft Disability Regulations, assisting in making recommendations to the Commission relative to regulatory rule making.

Beth has co-authored several amicus briefs on cutting edge issues in employment law in the Supreme Judicial Court and the 1st Circuit Court of Appeals, including: